Just because a government inflates the money supply, it does not mean that price inflation will follow. The money supply must be inflated at such a rate that it exceeds the demand for the money for price inflation to occur. The demand for any given money can vary depending on its ability to retain purchasing power relative to other forms of money, and the number of people using (or demanding) that money. The number of people using any given money can depend on legal tender laws, agreements between nations on which money (currency) to use to conduct business, and availability, to name but a few factors.

U.S. dollars have been around for more than 200 years, in one form or another. For much of that time, the dollar has been backed by gold and recognized around the globe as a sound money. Beginning in 1914, however, the Federal Reserve Bank (Fed) was created as a central bank designed to manipulate the money supply, interest rates, and more recently, the markets and unemployment. Since the Fed has assumed the job of regulating the money supply, the U.S. dollar has lost 98% of its purchasing power. The flip side of that same coin is that prices have risen manyfold and according to the Bureau of Labor Statistics, $1.00 dollar in 1913 could purchase what $23.63 now buys. That’s price inflation!

More recently, the Fed has been inflating the money supply at a greater rate than ever before (see graph below). 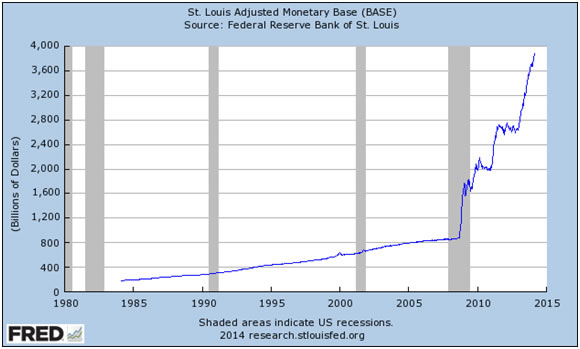 So if the Fed has expanded the money supply so much lately, why haven’t prices gone up much? Four reasons:

While these four factors have kept inflation in check to some degree, there is still the question of how much inflation we really have.  Do we rely on U.S. government statistics (from the same entity that has repeatedly revised the formula for calculating price inflation and stopped publishing M3—the broad measure of expansion of money and credit), or do we find an independent source of data?  If we look at www.shadowstats.com, we find that there has been a little more price inflation than the self-serving U.S. government statistics reveal.  In fact, we can see prices rising 4-5% for each of the past few years.

And while most people don’t think that’s so bad, the really scary thing is the insidiousness of inflation. As the currency expansion goes hyperbolic, the danger of hyper-inflation won’t be realized by most people until it’s too late.  For the best explanation of how sneaky inflation can be, click here.  After 100 years of money printing…the “last five minutes” before hyper-inflation will last about eight months. So the next time you ask yourself, “What inflation?” just remember…you won’t see it coming until it’s too late.