ISIS: Can We Afford to Fight It?

Back in 2003, the Bush Administration estimated that the war in Iraq would cost between 50 and 60 billion dollars.  Others estimated a higher cost, but no one suspected that it would cost $4.4 trillion.

Today, we are joining a new war, against ISIS (Islamic State in Iraq and Syria), “an unrecognized state and a Sunni insurgent group active in Iraq and Syria in the Middle East.”  It has proclaimed itself to be a caliphate.  Others call it a terrorist group.  In any event, it has secured control over numerous oil fields and has an army of 50,000 to 80,000 soldiers.

According to authors C. Eugene Steuerle and Caleb Quakenbush of the Urban Institute, future revenues have already been overcommitted, without additional war expenses. 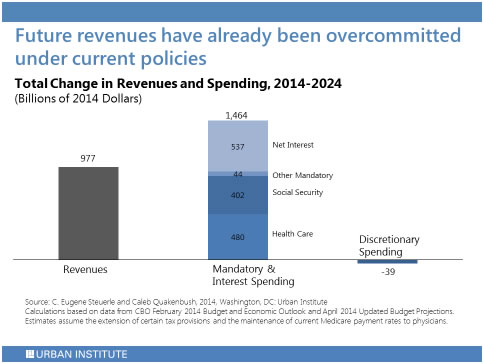 So, where will the funds come from to fight against ISIS?  In the past, China has been happy to support the U.S. government’s adventures by investing in U.S. Treasury Bonds, but that appetite may be waning…as is Russia’s.  In fact, China, Russia, and other countries are looking for ways to avoid using the U.S. dollar in trade.  In effect, they want to remove the U.S. dollar as the world’s reserve currency.  Imagine what that will do to the demand for U.S. dollars.  If half the people currently using U.S. dollars no longer want them, their value will plummet, their purchasing power will plummet, and all remaining dollar holders will be much poorer very quickly.  Of course, this won’t stop the Fed from printing more currency to purchase the U.S. debt that no one else wants.

So, the question is:  Which will come first?

In any event, the United States can’t afford to fight another war.  It has already over-committed its funds.

P.S.      Stay tuned for the U.S. government’s next war…against Ebola.  We got Obamacare just in time!